When I was 7 years old, I was diagnosed with Crohn’s Disease, and after years of tests and uncertainty and not being treated correctly, I was diagnosed with severe Crohn’s Colitis (Crohn’s of the large intestine/colon) in November 2008 when I moved up to the adult clinic. Crohn’s Disease put me through hell; I’ve had every medication, test and treatment going pretty much and my body became reliant upon Prednisolone (Steroids) but never seemed to be healed even slightly by any medication/treatment put into it.

In April 2010, I was put onto a treatment via IV infusion called Infliximab (Remicade) and this seemed to work wonders to how I felt, but all was a very different story on the inside! The infusions seemed to keep me on the level and mainly kept my symptoms at bay, apart from side effects from the treatment such as low immunity and fatigue, but most of all, I seemed to be able to eat, which had always been a big deal for me as I battled with trying to eat through the agony for years. I had a strange feeling inside towards the end of the first year of the treatment that things were perhaps not quite right, and this was confirmed by my routine colonoscopy; I had developed 3 severe strictures (narrowings) throughout my colon with deep ulceration and swellings, the treatment had not done any good, or on the other hand made things much worse.

Over the next few months, I had tests such as CT scans, which really hurt because of the narrowing of my rectum and soon, surgery was on the cards. I always knew this was a possiblity in recent years, but had never really thought there was a high chance of it happening! I was originally advised by my Gastroenterologist that I would need surgery to have the bad parts of my colon taken away and have resection surgery, but then when it came to meeting with the top surgeon (“Professor/Prof”), he gave me the news that this would not be possible because of the extent of my disease and that I would need the whole colon taken away. I was also told that I was not a successful candidate for the J-Pouch procedure (an internal pouch) as my disease was too far advanced, especially in my rectum. Even though this was a big shock for me, I had already been telling myself that this may well be a possibility in reality, so had tried to get my head around it, but the truth is, you don’t start to get your head around it until everything happens and surgery has been done, in my point of view.

I was then in and out of hospital with severe pain and dehydration, on lots of IV fluids and medication over the next few months. I was getting desperate to escape 13 years of agony and distress and pure hell with Crohn’s Disease that surgery seemed like the light at the end of the tunnel! After being put on yet more steroids then taken off them only to plunge back into another flare-up, a  date for my surgery was made; Tuesday 9th August 2011. I spent the few weeks before not knowing where to put myself or how to deal with what I had to face, but what got me by was the amazing support I received from my family, my amazing stoma nurses & few true friends and the knowledge that this operation was to be done to make me better and get me out of this 13 years of what seemed to be never-ending hell.

The Saturday before my operation, my Dad had to take me into Accident & Emergency as I had not eaten or drank anything for days and was in agony and my weight had plummeted to around 5 and a half stone.

I got admitted into hospital after a long over 6-hours in the A & E department in agony where I was finally given something stronger for the pain – morphine! Both good and bad reasons for morphine I’d say, but that’s all another story, at least it took away the pain!

Then the Tuesday of my surgery arrived, and I went down for my operation, first on the list, after being marked up for my stoma site and prepared on the Monday evening. The next few days I cannot really remember, they are all a bit of a blur, apart from me remembering my epidural hadn’t worked and me being in agony and wondering if I could pluck up the strength to look down at my stomach!

I spent a few days really ill, being constantly sick with bile as my bowel decided to “go to sleep” for a while and I remember just being in and out of pain and even saying that I didn’t want to be here anymore! I have never felt so horrendous in my life and as helpless and like there was no way out. Every slight bad smell made me heave and I could not seem to escape the smell of my stoma contents no matter where I went, even though there was no smell escaping from my stoma bag!

I am now over 9 years after my operation and wow, it has been a huge learning curve & still is, always learning new things! In these past years and months I have learnt a lot about having a stoma and what affects mine. I have had issues… I won’t sugarcoat it and say that living with an ileostomy is a dream, but it’s far from the horrible existence I had before, I can actually live now. I am currently having narrowing issues just behind my stoma which you can read about in my posts.

Like everybody is entitled to, I still get my down days, but then I just remind myself how far I have come and that I am alive!  I feel I have achieved a lot already in this time and hopefully will continue to come on in leaps and bounds in the future. I have a quality of life that I have never had before and a better appetite, despite it being limited at the moment due to my narrowing issues. I am in a full time job which I love. The operation was 100% worth it and I am glad I made the decision to have it, or I definitely wouldn’t be here to make decisions now. I offer support to others on a voluntary basis at present and really enjoy this. If I can help others, even just by a little amount, then that makes me feel very happy and I know that it has been time well spent. I am just so thankful for my life & to my surgeons and most of all to the amazing support and love I receive from those around me. They have got me through hell ♥

7 thoughts on “My Crohn’s Colitis Story”

This site uses Akismet to reduce spam. Learn how your comment data is processed.

WANT TO GET IN TOUCH?

Behind the warrior stripes

I am also a blogger for Comfizz (Comfizz Blog) & Pelican Healthcare (Pelican Blog) where I post at least monthly. 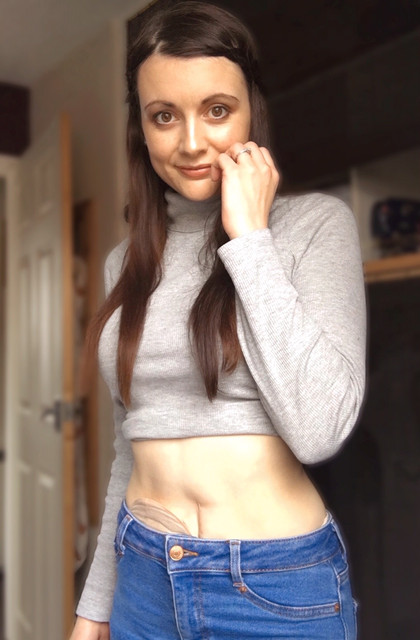